This is How You Play Canasta

Play Canasta originally found its way from South America and North America to Europe and got its name because discarded cards of one card value, for example seven jacks, are put into the basket (Spanish “canasta”) during the game. The game requires 52 sheets with four jokers twice. Canasta can be played by two to six players, but traditionally with four players in two partnerships.

Before the game / opportunities to win

The player with the highest card value is also the first dealer. This task changes clockwise from round to round. After the dealer has shuffled the cards, he deals 11 cards to each player. Now he places the remaining pile face down in the middle of the table, takes the top card from the pile and places it next to it. If he reveals a red or black three-card, a two-card or a joker, the dealer must draw new cards until a card from four to ace is open.

The player to the left of the dealer starts, then it goes clockwise.

Course of the game

First, the player draws a card from the face down pile. Now he could make a “message”, which means that he could put three cards of the same value in front of him – for example, spades seven, diamonds seven, hearts seven. Below that there must be at least two natural cards. In the case of an extended message, there can only be three jokers or wild cards (two-card or joker). A canasta consists of a seven-card message. 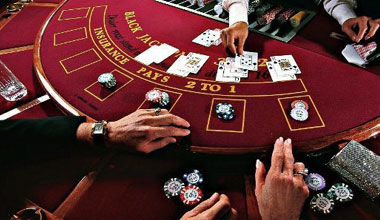 When the player has made all the reports for a round, he places a card face up next to the covered pile. If the player to his left now holds a “real pair” in his hand, for example, seven of spades and one of seven of hearts or once of seven of spades and once of jokers and there is also a seven on the discard pile, he may pick it up and report it make. If it is the first registration, he must make sure that he reaches the minimum number of points. He also “buys” the remaining cards from the discard pile with this move, which means that he may take up the cards from the discard pile.

After that, however, he may no longer draw an additional card from the face-down pile, but instead, after completing all the messages, places a card on the open pile as normal. However, if there is a “wild card” or a red or black three on top, the discard pile is “frozen” and cannot be “bought”. This can be indicated during the game flow by placing these cards on the discard pile in a clearly visible position. This stack could only be bought if a player has two natural cards of the top value of the discard pile in hand.

If it is the turn of the same party, it is possible for a player to place a matching card on his party’s announcements, for example a diamond eight on an eight, if his partner has already made a first announcement.

If a player has made all the notifications and his partner has completed at least one canasta, ie seven cards of one card value, he can “make out”, ie discard all cards. Before doing so, he has to ask his game partner: “May I make out?” If they can still make a promising announcement, they answer with “No”. If the party is in the lead and the partner could not make any further reports, he answers with “Yes”. These answers are binding.

However, there is also the “concealed making out” . Here, a player can make all the notifications and discard his cards with just one move.

If a player has received one or more red threes during the deal, he must put them in front of him and draw the discarded number of cards from the stack again. If, on the other hand, he draws a red three from the stack later in the game round, he must place it, but may not draw a replacement card from the stack. If a player keeps it in hand, it counts as minus points.

Red threes count 100 points per card at the end of the game, but only if there was a first registration. They do not count as initial reports or notifications themselves.

All two-card and joker cards are called wild cards and can replace any cards in messages. However, there must always be more real or “natural cards” in the messages than wild cards.

Goal of the game

During the game, players try to make as many canastas – seven cards of one card value – as possible. The team of two, which first reaches 5,000 points after several rounds, wins the game.

Scoring of the leaves 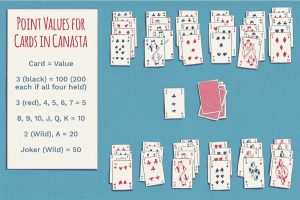 Both parties now add up their points of the reports, including finished canastas. A joker earns 50 points, ace and two 20 points each, eight, nine, ten, jack, queen, king 10 points each, four, five, six and seven five points each. If a black three is closed, this counts five points. A red three earns 100 points if there is an initial notification in the game. If a party has actually placed all four red threes, you will receive 800 points.

The cards that are still in the hands of the other players (including the game partner) are counted as minus points for the respective party.

Canasta can also be played online

Some online casinos and other providers have already recognized the trend of online card games and so it is clear that you can also play Canasta online. For example, Star games also offers you the opportunity to play Canasta for real money.